Close to the Sun

Close to the Sun

Storm in a Teacup

Close to the Sun is first-person horror adventure game, developed by Storm in a Teacup and published by Wired Productions. It was released for Microsoft Windows on May 2, 2019, and will be released on Xbox One, Play Station 4, and Nintendo Switch on October 29, 2019.

It’s 1897. Deep in international waters, the Helios stands still. Dark clouds loom overhead as unforgiving waves crash against the hull. Colossal effigies of gold, decorated with magnificent finery, stretch as far as the eye can see.

Born of Nikola Tesla’s vision, the Helios serves as a haven for the greatest scientific minds. An unbound utopia for research, independent from state and isolated from the gaze of society. Free to push the boundaries of matter and time.

Journalist Rose Archer steps aboard the Helios in search of her sister Ada. She quickly discovers not all is as it seems. Grand halls stand empty. The stench of rotting flesh lingers in the air. Silence. A single word is painted across the entrance… QUARANTINE!

A limited Collector's Edition has been produced for the game's console release. Only 1,000 copies will be available and can be pre-ordered from the Wired Productions website. It includes:

Rose travels through the ship before being contacted by Ada through the communication device; Ada claims that she did not send any letter to Rose, despite the fact that the letter was in Ada's handwriting. The two sisters decide to try and meet together in Ada's dorm room. While heading to the room, Rose comes across several mutilated bodies of Helios Scientists. Additionally, the words, "Time is not a River" and "The Circle must be Broken" are scrawled everywhere, seemingly in blood. Ada reveals that there was an accident in one the experiments aboard the ship; The exact nature of the accident as well as who caused it, whether it was overconfidence or sabotage, is not explained. Ada only explains that the experiment had to do with Time, the One-Electron Theory, along with the fact that they were drawing the seemingly endless supply of electricity from time itself. While explaining this Ada also theorizes that a future version of herself sent the letter to Rose using the research she was developing on the Helios.

During these events, Rose has begun to see strange ghostly visions of people. These visions seem to be visions of the past; Of people going about their daily business before the accident. Rose also received a communication from a man called Aubrey, who is trapped in the Engine room and requests her help, but Rose only does not hid the fact that she will only help him after finding her sister. Aubrey shows clear signs of mental instability when he reveals that he talks to the dead body of a friend he calls, "Benny".

Ada finds herself trapped in the surgery room within the Biology labs by mysterious means and asks Rose to find one of her research note books which is hidden in Ada's dorm room. Rose finds the notebook, only to then be trapped within the dorm by Tesla who claims to be trying to manage the situation. Rose enlists Aubrey's help to move through the facility as his position within the engine room allows him to access various parts of the ship. In return, she promises to come and save him, after finding Ada. Aubrey agrees to the deal and opens the door for her. As Rose begins to leave the dorms, she comes across a deranged man butchering a scientist while muttering about breaking the circle. Aubrey calls him Ludwig and instructs Rose on how to escape through a nearby rail-station and onto a rail-car. However Ludwig sees Rose and begins to chase her; He shows knowledge of who she is and blames her for the current predicament, despite Rose having no prior knowledge of him. Roses eventually gets away from him.

The Rail-car eventually derails due to damaged parts of the track and Rose is forced to make her way to the biology labs on foot. As she travels, she comes across a strange blue mist that Aubrey calls "Exotic Energy" which is derived from the time-electricity experiments. She then witnesses two scientists being killed by a strange monster before the monster begins to chase her. Aubrey saves her by sealing the monster behind a door. He calls the monster a "Time Anomaly" and describes them as Antibodies within Time, trying destroy an infection. However, they are only able to appear in the presence of Exotic Energy.

Rose finds herself near an observation deck to the Surgery room and is briefly reunited with Ada; However Exotic Energy begins to flood the room. Ada directs Rose to find her second notebook which contains the rest of her research which is hidden in the Theater, before she is killed by a Time Anomaly. Rose is broken by these events and initially wants to give up, but is incited to keep going by her promise to find all of Ada's research and to save Aubrey. Rose makes her way to the Theater where visions of Ada and Tesla direct her towards the second notebook. These visions also showcase the friendly relationship between the two.

Just as Rose finds the notebook, she is confronted by Ludwig once again. She manages to escape and, by accident, lures him over a weakened section of corridor that collapses under their weight and drops Ludwig into a massive fire. Rose then makes her way to the engine room to find Aubrey. After completing several puzzles, Rose arrives in the engine room only to be ambushed by Aubrey who reveals that he was listening in on her conversations with Ada; He actually wanted Ada's research. He reveals that he was a well-regarded researcher before Ada arrived. Once she came onboard, she took the spotlight with her groundbreaking work and he was demoted from his original post to the engine room. He further reveals that he was responsible for flooding the surgery room with Exotic Energy and causing Ada's death. His goal in this was to take Ada's research and seal the rift that is allowing the Time Anomalies to appear and come out of the event as the hero, thereby returning to Tesla's good graces. Rose, infuriated by this reveal, declares her intention to kill Aubrey. He runs away after this, leaving an injured Rose to face off against numerous Time Anomalies.

Rose is saved by Tesla who somehow manages to force the Time Anomalies away; he takes care of her while she is unconscious before leaving to try and stop Aubrey; Tesla believes that Ada's research is beyond Aubrey and that he would only succeed in making the rift worse. He enlists Rose's help, via the communicator, when she wakes up to climb the Tesla Tower and confront Aubrey. As Rose makes her way to the tower, she comes across the Surgery Room but is shocked to see Ada's body is missing. She then has a vision of herself carrying Ada's body to a garden; An event that she has no memory of which implies that her visions are may be more than they seem.

Tesla's fears are proven true when Aubrey begins to divert power from various parts of the ship in an attempt to close the rift but is only exacerbating the event. Rose begins to ascend the tower and manages to distract Aubrey long enough for Tesla to arrive at the top and begin to fix the problem. However, just as Rose arrives, Ludwig also shows up, having survived the fire, albeit, severely wounded. He stabs Rose in the hand before killing Aubrey, while declaring his intention to break the circle. He tries to kill Tesla as well, but he is saved by Rose who activates the machinery around them to electrocute Ludwig. Tesla begins to work frantically, stating that the machinery is in critical state and directs Rose to escape with Ada's research.

Rose manages to flee the tower before it collapses. Tesla manages to contact her on the communicator revealing that he too survived by unknown means that he does not explain as there are "Too many variables". He directs Rose to his personal escape pod which is ejected from the ship as it sinks. The game ends on a cliffhanger with Rose in the pod, reading Ada's letter understanding the hidden meanings within it, before Tesla declares that Ada's research is key to everything and that using it they can undo everything and save her. 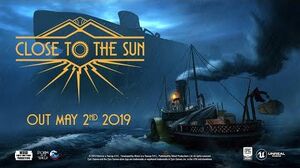 Close to the Sun Out May 2nd Epic Games Trailer 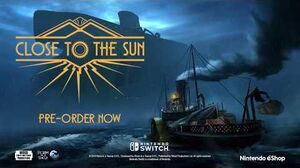